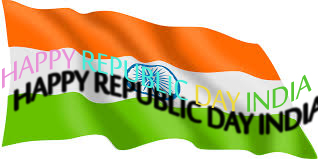 Every state also shows its performance and achievement through Jhankies. The President of India takes the salute of the parade.

26th January 1950 was the day once the constitution of our country came into force and our country became a secular democratic republic. Since then, this day is celebrated as the Republic Day of India.

Our constitution was signed by Dr. B. R. Ambedkar and so, he is known as the father of the constitution. This day is celebrated as a national festival. It is celebrated with great enthusiasm all over the country.

Celebrations of this day mainly take place in the capital which is Delhi. However, it is celebrated throughout the country in schools, organizations, colonies, collages, etc., on small scales.

On this day, people from all over the country and tourists gather to see the processions carried out at India Gate, Delhi. The arrangements are done well in advance.

The Prime Minister, on this day, pays homage to martyrs, and unknown soldiers, who gave their lives to save this nation. This is done at Amar Jawan Jyoti at India Gate.

After that, the President comes from Rashtrapati Bhawan with the chief guests, who are usually a foreign dignitary. The President hoists the flag and National anthem is sung by the school children.

After this, gallantry awards to the military and police personnel for their bravery are awarded.

Then, the march begins with the heroes of the earlier wars. The band plays the melodious tunes. The soldiers march smartly. The three wings of Indian force display the weaponry possessed by the country.

Last of all, comes the main attraction for the spectators. The country waits for jhankis of all the states, which represents the cultural tradition and progress of their region.

The cultural troupe also performs the folk dance. The school children also participate in the parade and put up a beautiful show in the form of dance or patriotic songs.

This whole program is telecast on the television for the whole nation. The citizens of the country feel proud of our country and this sparks the patriotic spirit in the heart of the citizens.

All the Government buildings like Rashtrapati Bhawan, India Gate, and the Central Secretariat are richly illuminated in the night.

The Republic Day celebration is continued till the 28th January when the beating the retreat is done. The soldiers taking part march back to their barracks.

It is our responsibility and duty towards the new generation to tell them the importance of celebrating this day with the tradition by which it is been celebrated every year, to keep the patriotic spirits alive.