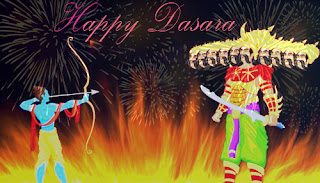 Dussehra is one of the main festivals of India which is celebrated on a very large scale. It is mainly celebrated by the Hindus.
The celebration of Dussehra continues for almost ten days in some parts of India. This is celebrated almost twenty days before Diwali.
This festival is celebrated around September or October. It reminds us of the victory of Lord Ram over the evil king Ravana.Lord Ram killed Ravana because he had kidnapped Sita. Hanuman helped Lord Ram to reach the kingdom of Ravana and save Sita from his captivity.

Hanuman set Ravana’s kingdom on fire with his tail. Lord Ram had a fierce battle with Ravana and finally managed to kill him. Therefore, this day is celebrated as Dussehra.

Dussehra is celebrated differently in different parts of India. In West Bengal, people worship goddess Durga. The goddess had defeated Mahishasura, an evil demon, after a battle that lasted for nine days.

The demon was finally defeated and killed on the tenth day. Hence Dussehra is also known as Navratri and denotes the victory of goddess Durga over the demon

Ram Lila is an important part of Dussehra. It is organized at different places. It is the reenactment of different events from the life of Lord Ram.

These events are dramatized by actors and presented on stage. The actors play the roles of Lord Ram, Lakshman, Sita, Hanuman, Ravana and other characters from Ramayana.

Parents usually take their children to watch such dramas in order to familiarise them with Ramayana. It is a big source of entertainment during this festival.

Sometimes, a fair is organized alongside for the entertainment of one and all. These include food stalls and enjoyable rides.

On the day of Dussehra, huge effigies of Ravana, Kumbhakaran, and Meghnad are erected. These effigies are stuffed with crackers and explosives.

In the evening, the public gathers around these effigies at a distance. Then, the actor who plays Ram shoots a fiery arrow at Ravana and the effigies start burning one by one.

The crackers filled these effigies start bursting with a loud noise. Within no time, the effigies are turned into ashes.

People happily return to their homes and exchange greetings with each other.The day teaches us an important lesson that good always wins and evil losses.