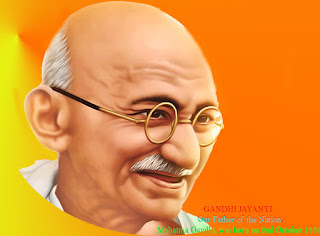 Our Father of the Nation, Mahatma Gandhi, was born on 2nd October 1869. The whole country pays homage to him on this day.
The main function of Gandhi Jayanti is held at Rajghat. Rajghat is the Samadhi of Mahatma Gandhi. People of every religion offer prayers at the Samadhi of Gandhi on 2nd October every year.
As a third important national program, every year, Gandhi Jayanti is celebrated. To celebrate Mahatma Gandhi on his birthday, it is celebrated by the Indian people of the whole country on October 2.
Gandhi is famous as the Father of the Nation and Bapu. He was a patriot leader and led the entire country of Indian independence movement while walking on the path of non-violence.
According to him, non-violence and truth are the only weapons to win the fight for freedom from the British rule. He also went to jail several times, although he continued his non-violence movement until the country got its independence. He always believed in social equality, so the untouchability was against the grimness.

Religious prayers are also kept at the mausoleum in the morning. It is celebrated in schools and colleges throughout the country as a special national festival by the students.
Students celebrate this festival through question-answer competition, art competition etc., based on dramatic drama, poetry lecture, singing, speech, essay writing and participation in the second competition based on Mahatma Gandhi’s life and his work.
In his memory, Gandhi’s most beloved song “Raghupati Raghav Raja Ram” is also sung by the students.
The best performing student on this day is rewarded. He is a very inspirational and exemplary person for many political leaders, especially the youth of the country.
Other great leaders such as Martin Luther King, Nelson Mandela, James Lawson, were inspired by peaceful methods to fight Mahatma Gandhi’s non-violence and freedom.
celebrate of india
Share: