Mrs. Pratibha Patil : Pratibha Devisingh Patil was the first female president of India. She was born on December 19, 1934, in a small village of Jalgaon district in Maharashtra. She received her early education in Jalgaon.

She also did her post graduation in Arts from Jalgaon. After this, she studied law from Government Law College, Mumbai, and started working as a lawyer like her father. She also worked to improve the social conditions of women. as a college student, she took a keen interest in extra-curricular activities and was a very good sportsperson. She was a good table tennis player. 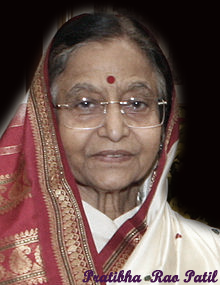 At the age of 27, Pratibha Patil began her political career. In the year 1962, she was elected as a member of the Maharashtra legislative assembly. She then served Maharashtra in various capacities, as a minister, as the leader of the opposition and as the President of the State Congress Party.

In the year 1965, she got married to Devisingh Ransingh Shekhawat. He was an educator. Along with her husband, she was involved in setting up various educational and professional institutions to help the neglected, deprived and disadvantaged sections of the society. She has also set up an educational institute in Jalgaon and Mumbai. She was also a founder of a co-operative sugar factory and a co-operative bank named after herself as Pratibha Mahila Sahakari Bank.

Pratibha Patil’s political career comprises various portfolios as the cabinet minister from 1967 to 1985 when she was elected to the state legislative assembly on four consecutive occasions. She served as the deputy chairperson of Rajya Sabha from November 1986 to November 1988. In 1991, she was elected to the Lok Sabha from the Amravati constituency. She never lost an election that she contested.

In 2004, Mrs. Patil was appointed as the governor of Rajasthan. She was the first woman to hold the prestigious post. In July 2007, she became the first woman president of India defeating her challenger Bhairon Singh Shekhawat.

Mrs. Patil has a simple lifestyle and a sweet nature. She is always seen dressed in the traditional Indian sari. She has wide political experience.

Mrs. Pratibha Patil has been closely associated with social work, education, and co-operative movement. As the President of India, she achieved great success and appreciation. She wished to see every Indian as the beneficiary of the development process. Her priority was to fight poverty, ignorance and disease, malnutrition and infant mortality.

Mrs. Pratibha Patil’s election was a landmark in Indian political scenario and she was seen as a symbol of women empowerment in India. She took the country to heights of fame and glory through her vision and decisions. She served as the President of India till the year 2012. She gave a new direction to the women of our country.