Robbery:Robbery It was late evening and the shops were closed on the market. I was waiting for my father in the car. My father owned a jewelry shop. He was busy making the calculations. Suddenly, two men on a motorcycle stopped outside the shop. They got off and walked into the shop. 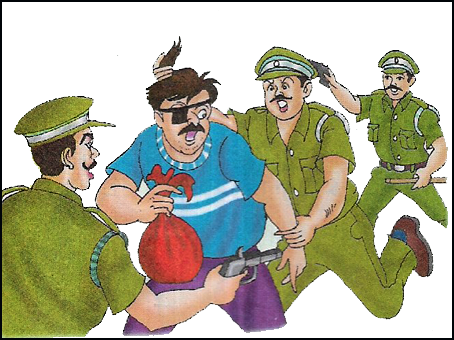 He also asked them to leave. The two men then drew pistols from their pockets. On seeing this, I ran out of the car to help my father. I went and stood close to him.

One of them pointed a pistol at me and the other at my father. My father froze and stared at the pistol pointed at him. The two men were robbers and were wearing dark glasses to hide their identities.

They warned us from making any noise the next moment my father and I were made to lie face down on the floor. We heard the cash registers ring and the drawers open.

They asked us to give the keys to the lockers. The men then tied our feet and hands at the back with a rope. We could do nothing but obey the robbers or they would have shot us.

They were carrying bags to fill them with valuables. They packed everything that was there in the shop. Then we heard the roar of a motorcycle starting and suddenly all was quiet.

We looked up and did not find anyone. The robbers had left. All was quiet on the market as well. We could not get up by ourselves. We started screaming for help.

The security guard slowly regained consciousness and ran to help us. He untied us one by one. We checked the whole shop. There was nothing that they had left behind. The cash register, lockers, and drawers were all empty.

It was a real shock to us. All our earnings were lost. We had nothing to start our business with. But we thanked God that the robbers did not harm us. We informed the police and let them handle the case.

It was, however, of no help as the robbers had left no clue behind. We decided to start our business from scratch and make it successful again. We also made sure to install modern security systems in the shop so as to avoid any such incident in future.