Bachchan‘s acting career began in 1969, reaching heights in the mid-70-80s. After withdrawing from the acting career in the early 90s, Bachchan returned in 1997 and became the host of the television show, Kaun Banega Crorepati? on Star Plus.

He is present once again active in the Indian film industry. Bachchan was also a member of the Indian Parliament (MP), being elected in 1984 from Allahabad. His political career was short lived as he resigned from this post after only 3 years. 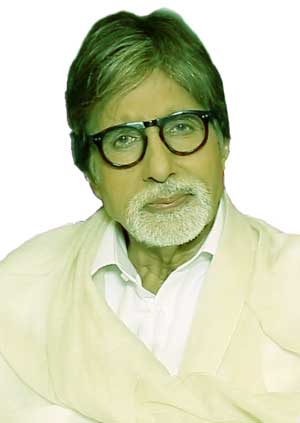 Amitabh Bachchan — the ‘Shahenshah’ of Bollywood was born to a well-known poet, Harivansh Rai Bachchan and Teji Bachchan in Allahabad on October 11, 1942. He has a brother named Ajitabh.

Amitabh attended Allahabad’s Boys’ High School, followed by Nainital’s Sherwood College, where he gained a degree in Arts. He later went on to study at Kirori Mal College in Delhi University earning a degree in science.

Before entering Bollywood, he was working as an executive in a shipping firm at Kolkata. Bachchan was also a former stage actor and a radio announcer. His career graph in acting took an upward swing with the release of Zanjeer in 1973.

He monopolized the Hindi cinema after proving his worth as an accomplished actor when cast against Rajesh Khanna in Anand and Dilip Kumar in Shakti (1982).

At the beginning of his career in Bollywood, he had to struggle a lot because of his unconventional looks and his height. At 6’3″, he was considered far too tall by the filmmakers surprisingly, despite having a rich baritone voice.

His rendering of Khai Ke Paan Banaraswala (Don) and Jumma Chumma Dede (Hum), became a craze with the younger generation. He has won many Filmfare Awards, National Awards and has been conferred Padma Shri for his histrionic achievements.

After a pause for some time, he came back to the silver screen to perform some selective roles.

Amitabh married Jaya Bhaduri, a well-known actress.It was on the arrangements of Ek Nazar (1972) that Amitabh and Jaya Bhaduri began to look all starry eyed at.

The couple has two children, Shweta and Abhishek. Abhishek has already followed his father’s footsteps having starred in movies such as Refugee, L.O.C, Kuch Na Kaho, Dhoom, etc.

In July of 1999, Amitabh Bachchan was named the Superstar of the Millennium by the BBC Online survey where he crushed numerous Hollywood legends, for example, Alec Guinness, Marlon Brando,Sir Laurence Olivier, and Charlie Chaplin.

Amitabh Bachchan is the first Indian actor to have been immortalized in wax at Madame Tussauds Wax Museum in London. On Amitabh Bachchan’s 64th birthday, the French Government honored him with its highest civilian award, the Legion d’ honneur Honour.

After receiving accolades and encomiums for putting the Indian movie industry on the world map, Amitabh Bachchan was conferred an honorary doctorate degree on November 4, 2006, by his Alma Mater; Delhi University.

In the years that followed, Amitabh featured in films such as Nishabd (2006), Cheeni Kum (2007), Bhootnath (2008) and Paa (2009).Paa won him his third National Film Award for Best Actor and fifth Filmfare Best Actor Award.In 2010 he dubbed in Malayalam film Kandahar and acted in Teen Patti along with Hollywood legend Ben Kingsley.

The Lifetime Achievement Award was conferred upon him at the 2010 Asian Film Awards. In 2011, he was honored with an Honorary Doctorate by the Queensland University of Technology in Brisbane, Australia.

On 27 July 2012, he carried the Olympic torch during the last leg of its relay in London’s Southwark. He made his Hollywood presentation in 2013 with The Great Gatsby, in which he played a non-Indian Jewish character, Meyer Wolfsheim.