A Visit To A Jungle Paragraph

Jungle: Jungle Last month, we were taken to a jungle for a camp. We went there with our teachers and friends. We hired a forest guide. A tropical jungle is an awesome place to visit. I was looking forward to this visit as I had read a lot about jungles in stories. 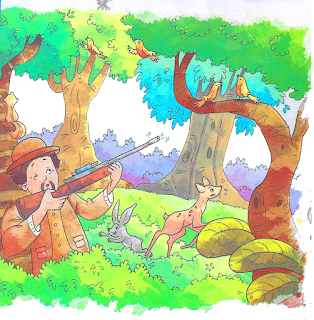 The moment we entered the jungle, it became semi-dark. Sunlight could barely penetrate through the leaves of the tall trees. The sky was almost invisible because of the canopy of leaves high above us. At ground level, thick vegetation grew in every direction.

The air was moist and had a peculiar smell to it.We could hear the sound of insects and the chirping of birds. Though we could not see them, except for some birds, we knew they were there.

I had no idea how we would find a way through the bushes and trees. We just kept following the path which our teachers took. As we crossed the tall trees, the teachers marked them with chalk.

I realized then how easily an inexperienced person could get lost in the jungle.We then found an open space that looked safe and proper to build our tents. After settling down, we went for a walk.

We found a river close to our base and collected clean water from there. Here we saw a herd of elephants on the other side of the river drinking water. The forest guide warned us that there could be crocodiles in and around the river. Therefore, it was not advisable to be there for a long time.

Also Read  Essay Paragraph About The Life of Street Hawker

Walking further, we saw different types of plants and trees. Some of them bore flowers that we had never seen before. The guide again warned us against plucking any flower or fruit as they could be poisonous.

We found a wide variety of mushrooms under the trees. For the first time in my life, I saw strange birds, insects, huge spiders, snakes, and vines as thick as a man’s hand. We could also hear the chattering of monkeys. The experience was unforgettable.

The most uncomfortable thing about being in the jungle was the presence of leeches. These little bloodsuckers never gave up. Despite thick boots and clothes, they still managed to bite me.

I was given first-aid and felt better. As it turned dark, the jungle seemed to get scarier. We lit a bonfire to keep us warm and also to keep the jungle animals at bay. Though we were carrying emergency lights and torches

with us, they were not of much help. We could hear peculiar sounds of animals that frightened us. But our teachers comforted us and told us to be brave.The next day, it was time to leave.

We wrapped our things and packed our bags. We then followed the same path that we had taken while entering the jungle. When we emerged from the jungle, the clear blue sky was a welcome sight. We had an adventurous outing and returned home with a great experience.