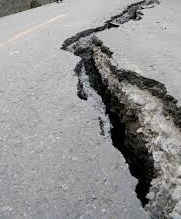 Earthquake: Few months before, we faced earthquake in our city. It was at the night when we all were in deep sleep. Suddenly, we faced some vibrations and a humming sound.

It lasted for few seconds only but had a powerful effect of shaking almost everything. It was an earthquake.

Though I could not make out as I was sleeping, my parents got up and woke me up and asked me to run out of the house. I saw that the fans were still moving to and fro. Outside the house, it was a complete scene of panic. All the people had come out immediately.

They were all discussing their experiences of the earthquake. Because of the vibration, televisions, crockery, and several other things had fallen and broken. There were few cracks in the walls of our building too.

We all kept standing outside. In the morning, we could see that the earthquake had affected the city badly. There was a complete scene of chaos.

Many buildings had collapsed and people were buried alive under them. Till a day before, the buildings that were standing high had turned only into big heaps of sand and cement.

The work of taking people out had already started. People were taken out, some dead some alive but with a lot of injuries. They were taken to the hospital immediately.

People were just looking around for their families and friends. One after another, they were losing hopes of getting them back. They had lost everything that they had. The earthquake had also affected the offices, schools and other buildings.

Most of the people had lost their homes. Temporary shelter homes were made at grounds and school buildings. Those who were alive were either coming up with their own injuries or were searching for the rest of the family members.

Several camps were organized which were providing food, shelter, and medical help to the victims of the earthquake. The whole city was at unrest. The government had supported these camps.

They were also keeping a record of people who were alive and were trying to relocate them. The schools, colleges, and offices were closed. I too was worried about my schoolmates. However, there was no way I could find about them.

It was a disheartening experience. It took months and years to get over with the terrible loss and settle again. However, it is only because of the high spirits and willpower of the people that this city is back to its original state.

People worked hard to rebuild it. Now, it has all the facilities and amenities. It is now, a city of strong people who can now face any situation in life.