Historical places are of great importance for the cultural life of any country. India has a number of historical places and monuments. Many forts, tombs, minars, and palaces had been built by the kings who ruled India long years back. 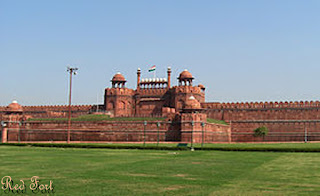 At the time of the Mughal rule, a number of historical places were built in Delhi, Agra and nearby areas. These places are of much historical value and tell us about the kind of life they led.

Each place has its own history and importance. The historical places define the architecture of the period they belong to. Each dynasty had a unique style of architecture that made it different from the others. As a result, we can see beautiful religious places, palaces, forts, and tombs.

Delhi has many historical places that attract tourists from around the world. These include Qutub Minar, Red Fort, Humayun’s Tomb, Jantar Mantar, India Gate, etc.

There is the famous Taj Mahal and Fatehpur Sikri in Agra. The Hawa Mahal, Jaigarh Fort and Nahargarh Fort are in Jaipur. Each place has its own unique architecture and significance.

Recently, our school organized a trip to the Red Fort in Delhi. This place is of great importance as on the Independence Day, the Prime Minister of India hoists the national flag here. We reached there in the morning by the school bus. The fort looked grand and amazing in the bright sun.

About Most Famous Historical Place In India

We hired a guide who told us about the fort in details. We learned that the Red Fort belongs to the 17th century and was constructed by the great Mughal emperor Shah Jahan in the walled city of Delhi. Delhi was the capital of the Mughals until the year 1857.

In that year, Mughal emperor Bahadur Shah Zafar was exiled by British Indian Government. There are many important buildings and structures within the Red Fort premises. Beyond the Delhi Gate, is a large open space, which originally served as the courtyard of the Diwan-i-Aam, the large pavilion for public audiences with an elaborate balcony for the emperor.

The columns were painted in gold and there was a gold and silver railing separating the balcony from the public. Then we went to the ‘Diwan-i-Khas’, the hall of the private audience where only select persons could meet the king.

Finally, we have a tendency to visited the War Memorial repository wherever weapons utilized in the primary warfare area unit exhibited

The visit was over but it left me thinking about the historical significance of the fort and the various things that the kings did in earlier times.

I was amazed to learn about such an important aspect of history of our country. This visit developed my interest to know more about Indian history and I decided to visit more such places soon.