Andre Agassi: Andre Agassi is a former world number one professional tennis player from the United States. He is one of only five male players to have won all four Grand Slam singles events during his career.

Agassi is also the only player in the open era to have won every Grand Slam singles title. He has won the Tennis Masters Cup and has been part of a winning Davis Cup team. He also has won an Olympic gold medal. 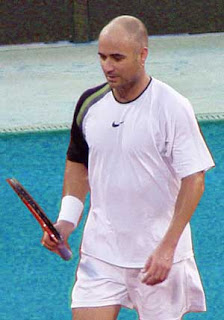 Andre Kirk Agassi was born in Las Vegas, Nevada on April 29, 1970. His parents are Mike and Elizabeth. One of four children, his sisters are Rita and Tami, his brother is Phillip.

In 1986, shortly after his sixteenth birthday, Agassi turned professional and won the last tournament of that year and the first tournament of 1988. He advanced from 25th to 4th in the computer rankings by winning six championships in 1988.

Twice, he went to the semi-finals of a grand slam event, losing both times, to Mats Wilander in an exciting five-set match at the French Open and to Ivan Lendl in four sets at the US Open.

However, 1989 was not a good year for him professionally as he did not win a single tournament in 1989 and reached the finals only once, in the Italian Open. Agassi beat Germany’s Boris Becker in the semi-finals of the 1990 US Open but lost to Pete Sampras in the final match. He was also beaten by Andres Gomez in French Open final.

His frustrations reached a peak in 1991 when he lost to Jim Courier in the semi-finals of the US Open. Until then, Agassi had been the most successful graduate of the Bollettieri Tennis Academy in Florida, but he was now ranked behind his classmate, Courier.

In 1987, when Agassi lost in the first round, he drew criticism for passing up Wimbledon, three years in a row. The reason he gave was that he was not allowed to wear his colorful outfits there, but many critics felt he was simply afraid of repeated failure.

In 1992, Agassi won a dramatic five-set match and sounded remarkably humble after his victory. “To do it here is more than I could ask for,” he said. “If my career was over tomorrow, I had a lot more than I deserved.”

After a poor year in 1993, Agassi hired a new coach, Brad Gilbert, and in 1994, he became the first unseeded player since 1930 to win the US Open, beating six seeded opponents, including Michael Stich in a four-set final.

Agassi won his third grand slam title, the Australian Open, in 1995, when he reached the finals of 11 tournaments, winning 7, and had a 73-9 record. His 26-match winning streak was broken by Pete Sampras in the US Open final.

Agassi won the singles gold medal in the Atlanta Olympics in the year 1996 and took the Lipton championship in Key Biscayne for the third time, but lost to Michael Chang in the semi-finals of the US Open.

Agassi was sidelined with a wrist injury for most of the 1997 season, but he won four ATP tournaments in 1998. Agassi came back to win the 1999 French Open finals tournament, becoming only the fifth male player in history to complete a career grand slam.

Agassi lost to Sampras in the Wimbledon finals, but he claimed his fifth grand slam title by beating Todd Martin for the US Open championship. That year culminated in one of the greatest resurgences in the tennis history.

After having been ranked 141st in the world at the end of the year, 1997, Agassi climbed into the top ranking at the end of 1999, despite losing to Sampras in the ATP World Championship title match.

In 2000, and 2001, Agassi won two straight Australian Open championships. His US Open finish, along with his Masters Series victories helped him finish 2002 as the oldest year-end World No. 2 at 32 years and 8 months. In 2003, he won the eighth (and final) Grand Slam title of his career at the Australian Open. The same year, he recaptured the World No. 1 ranking.

His ranking slipped when injuries forced him to withdraw from many events. In 2004, his career total rose lo 59 top-level singles titles and a record 17 ATP Masters Series titles. He also became only the sixth male player during the open era to reach 800 career wins.

Agassi finished 2005 ranked World No. 7 and had a poor start to 2006. Marred by injuries, he was forced to retire. Since retiring after the 2006 US Open, he has participated in a series of charity tournaments and continues his work with his own charity.

During his career, Agassi held the World No. 1 ranking for a total of 101 weeks. He earned more than US$ 30 million in prize money during his career, third only to Sampras and Federer to date.

He also earned more than US$ 25 million a year through endorsements, during his career and fourth in all sports at the time.

Agassi and fellow tennis star Steffi Graf were married in October of 2001. The couple has two children together, a boy and a girl.