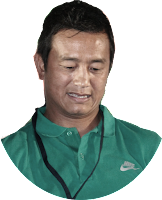 He has been awarded Arjuna Award in 1998 for his contributions to the Indian sports world. Bhutia has also been honored with the Padma Shri award in 2008.