Christopher Columbus was the eldest of five sons of Domenico Colombo and Susanna Fontanarossa. Christopher was born between August and October 1451, in Genoa, Italy. he had two younger brothers, Bartholomew and Diego.

Columbus began on the sea early, making his first voyage, to the Aegean Island of Chios, in 1475. One year later, he survived a shipwreck off Cape St. Vincent in which he had to swim ashore.

In 1477, Columbus sailed to England and Ireland with Portuguese marine and also bought sugar in Madeira for a Genoese firm. 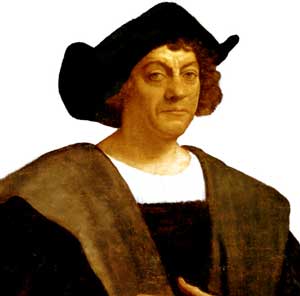 In 1479, Christopher married Felipa Perestello Moniz from an impoverished noble Portuguese family. Their son, Diego was born in 1480. Felipa died in 1485, and Columbus later began a relationship with Beatriz Enriquez de Harana of Cordoba, with whom Christopher had his second son, Ferdinand.

Columbus and Enriquez never married, but Columbus supported her. In the mid-1480s, Christopher focussed on his plans of discovery. His biggest dream was to find a westward route to Asia. In 1484, he had asked King John I of Portugal to back his voyage west but was refused.

The next year, he set out to Spain with his son, Diego to seek the aid of Queen Elizabeth of Castile and her husband, King Ferdinand of Aragon. Even though the Spanish monarchs first rejected Christopher’s request, they gave him a small annuity to live on, and he remained determined to convince them.

In January of 1492, Christopher acquired the help of Elizabeth and Ferdinand, subsequent to being rejected twice. On August 3, 1492, the fleet of three ships-Nina, Pinta, and the Santa Maria-set forth from Palos, on the Tinto river in southern Spain.

The first sight of land came at dawn on October 12 from the Pinta Ship. The place of the first Caribbean landfall was most likely modern, San Salvador, or Waitling Island, in the Bahamas.

Thinking he has reached the East Indies, Columbus referred to the native inhabitants of the island as “Indians,” a term often used to identify indigenous people of the New World. The three ships sailed along other Bahama Islands and landed in Cuba, which Columbus falsely called Mainland of Cathay (China).

There was little gold there and his exploration continued by sea to Ayti on December 6, which Columbus renamed La Isla Espanola or Hispaniola. He seemed to have thought Hispaniola was Japan, but in any case, the land was rich in gold and other natural resources and allowed Columbus to return to Spain in the spring of 1493 with wealth enough to persuade his sovereigns of his prosperity.

After a difficult journey back to Europe, Columbus paid a visit to King John II of Portugal, which bought up the suspicion that he had connections with Spain’s enemy. After displaying all of his treasures to the queen and the king, they were easily pursued to fund another journey.

This time there were at least 17 ships and 1,300 men set sail on September 25, 1493. A route to Hispaniola and Navidad, the settlement he had founded there, Columbus and his fleet entered the West Indies near Dominica and proceeded past Guadeloupe and other, lesser Antilles before reaching Borinquen.

Upon reaching Navidad, Columbus found the settlement destroyed and the Spanish settlers dead, victims of a strong native attack. Columbus announced himself Governor of Hispaniola, meaning it to turn into an exchanging post for European pilgrims.

After searching the Cuban coastline and the Jamaican for gold Columbus declared Hispaniola, the richest source for gold and other spoils.

In February 1492, 12 ships returned to Spain from La Isabela commanded by Columbus associate, Antonio de Torres. Under the command of Columbus, two associates led a campaign of violence against the native inhabitance of Hispaniola, in revenge of their murdered comrades Navidad, they killed and captured many natives, taking them as slaves.

He set sail on May 9, from Cadiz on four ships, arriving at Santo Domingo on Hispaniola on June 29. He was searching for the strait to India, but did not find it and was forced to turn back. By the end of his voyage back, Columbus was not too healthy.

He was suffering from Arthritis as well as other effects from a bout with Malaria. With a small portion of gold from Hispaniola, he lived comfortably for his last years. Columbus died in Valladolid on May 20, 1506.