Diego Maradona: Diego Maradona is quite possibly the greatest football player the world has ever seen. Certainly, in the age that Maradona played football, it was a higher tempo sport than the one enjoyed by the Brazilian Pele, so the skill that the Argentinean showed can be regarded as extra brilliant.

Born in a slum area on the outskirts of Buenos Aires in 1960, Diego Armando Maradona was blessed with unique skill. As a youngster, he would often entertain the crowds at football matches at half time, with demonstrations of ball juggling, at which he was extremely adept. It was due to these amazing feats that he would acquire the nickname ‘El pibe de oro’, (the golden boy). 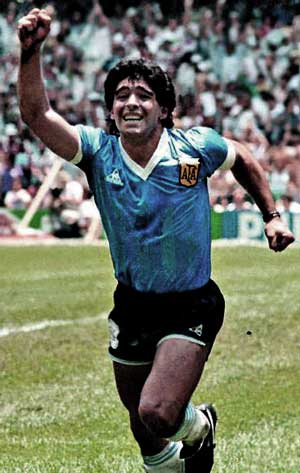 Local Argentinean clubs were quick to take note of the youngster’s skill. His first club was Argentinios Juniors, but he had soon moved on to the world recognised Boca Juniors. He made his full international debut in 1977, at the age of 17. A year later, Argentina won the World Cup, but the young Maradona was not in the squad. Although he had a supreme talent, the International side was very strong that year anyway, so instead he was nurtured gently. This meant him leading the Argentina youth team to win the Youth Team World Cup in 1979.

By the time the next World Cup came along (Spain 1982), Maradona was an established member of the National team. Although many people reckoned that he performed poorly in that tournament. massive clubs all around the world became aware of the unparalleled skill he possessed. He showed excellent balance and strength, and his skill and ball control were second to none. Subsequently, he moved to the great Spanish club, Barcelona.

This move meant worldwide fame and a huge fortune. Maradona found it difficult to cope and it was whilst in Spain that he first took cocaine. In 1984, he moved to Naples in Italy where he was very successful (league champions twice, UEFA Cup, Italian Cup, Italian Supercup).

In 1986, he was at the peak of his footballing powers and led Argentina to win the World Cup. On the way, he scored a fantastic goal against England, dribbling the ball half the length of the pitch before coolly sliding it into the net. Maradona also scored the infamous ‘Hand of God’ goal, where he claimed his illegal handball was an act of God. Rumours persisted, however, about his activities off the field. In 1991, he failed a dope test and was banned. On his return, he played for a variety of clubs, including a return to Boca Juniors.

Disaster struck for Maradona after the Nigeria game at the 1994 World Cup. He tested positive for the banned substance, ephedrine, and was banned from playing football for a year. Without him, Argentina were soon eliminated from that particular World Cup. By this stage in his career, years of drug abuse were beginning to take their toll. He returned from his ban to play for his home club, Boca Juniors, until his retirement from football in 1997.

He increasingly suffered ill health and weight gain. After his recovery and overcoming his cocaine addiction, he became a popular TV host in Argentina. He became head coach of the Argentina national football team in November 2008. His contract expired after the 2010 World Cup.

In 2000 Maradona published his autobiography Yo Soy El Diego (“I am “The Diego”) which became an instant bestseller in his home country. He was FIFA best football player of the country (2000). He became head coach of the Argentina national team in November 2008. In March 2009 Italian official announced that he still owed the Italian government 37 million euros in taxes. On March 22, 2010 Maradona was chosen number 1 in the Greatest 10 World Cup players of all time by The Times.

But for his terrible addiction to cocaine, Maradona would have definitely become the greatest football player the world has ever seen. He still came pretty close though; nobody since has quite matched up to him at his best. He will be always remembered for the superb football that he played, rather than his well-documented private life.