Edmund Hillary: Edmund Hillary and his Sherpa guide, Tenzing Norgay were the first humans to reach the Earth’s highest point: the summit of Mount Everest in the Himalayas.

Hillary was knighted for his feat and in later years led expeditions to the South Pole and to the source of the Yangtze River. He additionally subscribed to philanthropic work among the Sherpas through his Himalayan Trust.

Edmund Hillary was born in Auckland, New Zealand, on July 20, 1919. He spent his adolescence in Tuakau, a rustic territory only south of Auckland where he went to the neighborhood elementary school.

Hillary was skilled with a functioning creative ability and had an enthusiasm for perusing experience stories. Later, he traveled daily to the city for secondary schooling, where he was a shy and awkward boy. As a child, he helped in his father’s beekeeping business and eventually had to quit school to work with his father full-time.

In 1935, during a ski weekend on a school trip to Mount Ruapehu, Hillary discovered his joy in the mountains and it never left him. He would often escape to the mountains to enjoy skiing and hiking, and he developed a love of climbing. A few years later, Hillary climbed his first mountain, the 7,500 ft. Mount Oliver in New Zealand. 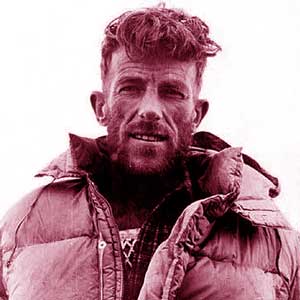 Hillary enlisted with the Royal New Zealand Air Force in World War il (1939–45), where New Zealand aided the Allied powers of America, England, and Russia in their war against the Axis powers of Germany, Italy, and Japan.

While serving as a navigator in the South Pacific, he was wounded in battle. Despite the physical setback, Hillary was determined to make a full recovery and resume mountain climbing.

During the 1940s, Hillary made many climbs in New Zealand, particularly in the Southern Alps. He quickly became recognized for his daring, strength, and reliability.

Then came climbs in Europe that brought the invitation to join Sir John Hunt’s expedition to Mount Everest, in the Himalaya Mountains in Nepal. For two years, Hillary joined Hunt in the Scottish Highlands to prepare themselves for Everest.

The highest point on Earth, Mount Everest measures 29,028 it high, roughly six miles. No one in history had successfully completed the climb, and many lives were lost during attempts.

In March 1953, Hillary and Hunt, along with twenty other of the best climbers in the world, gathered at Everest. Their company also included 350 Nepalese workers carrying 10,000 pounds of food and equipment, as well as thirty-six Sherpas, people who are familiar with the rugged terrain and are invaluable guides for climbers.

With the party’s base camp just 1,100 ft. from the summit, Hunt sent a two-man team, the rest of the way. They failed but returned to the camp with valuable information about how to attack the summit.’

Next, Hunt chose Hillary and Sherpa guide Tenzing Norgay (19141986) to make an attempt. After a heroic and death-defying climb, the two reached the summit on May 29, 1953, becoming the first two people to reach the top of the world.

Hillary wanted to use the sophisticated snow-Cats available to Fuchs, but he had to settle for Ferguson farm tractors for transport and hauling. When the last dump was established, Hillary made his own decision to head for the pole, which he reached with his three tractors on January 4, 1958.

He was the first person to travel there by land in forty-six years.

Hillary’s achievements were recognized internationally with the award of numerous decorations and honorary degrees, beginning with his knighthood in 1953.

They reflect the rare warmth and respect in which he was held. Later on, he was appointed New Zealand’s high commissioner to India. He was also the honorary president for New York’s Explorers Club.

In 1975, Hillary’s wife and teenage daughter were killed in an airplane crash. He later remarried, and after leading one last expedition in 1977, he retired to his bee farm outside of Auckland.

Hillary had also remained active in the region where he made his famous climb. The Sir Edmund Hillary Himalayan Trust provides funds and expertise to support reforestation, build schools and hospitals and use technology such as solar power.

He personally raised funds for the Nepalese people throughout the 1990s through public speaking engagements and lectures in the United States.

In a 1995 interview with James Clash, Hillary said, “I think the most worthwhile things I’ve done have not been on the mountains or in the Antarctic, but doing projects with my friends, the Sherpa people.

The twenty-seven schools we’ve now established, the hospitals—those are the things I would like to be remembered for.” He died in Auckland on January 11, 2008. Indian Government awarded him Padma Vibhushan posthumously.