Charminar – Charminar was built in 1591 CE, this building built in Hyderabad city of Telangana state of India is a memorial and a mosque. At present, this monument is the global heritage of Hyderabad and Charminar is also included in the main monuments of India. 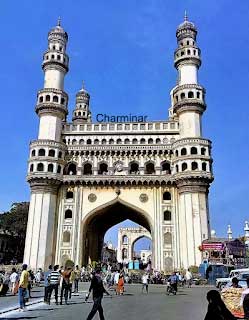 The Charminar has been constructed on the eastern coast of Musée River. Lad market on the left side of the Charminar and the Mecca Masjid on the south side. In the Archaeological and Architectural Treasure, it is also included in the “list of monuments”.
The English name of Charminar is made up of the variation of the word four and the minor, the English name of it is “four tower”. there are many mythological stories in this history of this monument.

According to the Archaeological Survey of India (ASI), this record has been recorded about Charminar, “There is a lot of stories about the cause of the construction of the Charminar.

While it is believed that the Charminar has been built in the middle of the city to prevent infection of the plague, people believe in it. “At that time it was a serious disease that could cause death. It is said that Muhammad Quli Qutb Shah made this mosque and prayed here.

The Charminar in Hyderabad

According to Jean de Théneaut, a 17th-century French passenger, the Charminar was built in 1591 CE, that is, in another Islamic Sahasar year (1000AH). In Islamic countries, it is celebrated as a festival, so Qutb Shah chose Hyderabad city to celebrate the festival, and the Charminar was constructed there.

Historian Masood Hussain Khan says that the construction work of Charminar was completed in 1592 and the city of Hyderabad was discovered in 1591.

According to the book “Days of the Beloved”, Qutb Shah started the construction work of Charminar in 1589,

which he had constructed at the place where he had seen the fort of his future for the first time, and the Queen’s conversion to Islam After that he named the city Hyderabad.

But this story was told by historians and scholars, but the local people had considerable faith in this story.

The fifth ruler of the Qutab Shahi Empire, Sultan Muhammad Quli Qutab Shah, built the Charminar in 1591. After transferring his capital, Golconda to Hyderabad, he constructed Charminar in Hyderabad. Today, Hyderabad has got global recognition because of Charminar.

In front of Charminar, there are four commands and four doors. The fifth ruler of the Qutab Shahi Empire, Sultan Muhammad Quli Qutab Shah, built the Charminar in 1591.

After transferring his capital, Golconda to Hyderabad, he constructed Charminar in Hyderabad. Today, Hyderabad has got global recognition because of Charminar.

Later, the Persian architect was also called to develop the city of Hyderabad. And then the mosque and madarsa were also built around Charminar. Charminar was built on the basis of Indo-Islamic art.