Scene in A Flood Affected Area

Flood Affected: Flood Affected Last year, we had gone to visit a village in east India around the rainy season. It was raining heavily there when we reached. The next two days it kept raining heavily. Soon, the village flooded with water. The rain was not stopping. 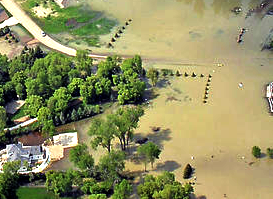 Flood is one of the highly devastating natural calamities. Every year thousands of lives are lost in flood. This time when we had to face it, it was disappointing to see lakhs of people becoming homeless.

Fortunately, we were living in a four-story building and it was a safe place. People came to our place to rescue. Water entered the ground floor of our building too. We went on the top floor and the sight of the flood-affected area is horrible.

People were running away for their lives. They were mostly those people living in mud huts. They had fled empty-handed. They were crying for their belongings which they had left in their homes which were certain to be washed away by the flood. They carried their children on their shoulder and ran.

I was shocked to see the terrible sight from my window in the morning. There was nothing except water there. Men and animals struggled between life and death. Poles, pillars and trees and houses, all were submerged in water.

At some remote places, people were standing on the rooftop or trees to escape from being washed away in flood. Many things were seen nothing in the water. Many trees were uprooted.

A large number of cattle were seen being flown away in the mighty current of the flood. Crops were completely destroyed and washed away too. Life seemed to have come to a halt. All the modes of communication were destroyed so the village was not connected to the outside world. The access was only by boats.

People had nothing to eat. Therefore, food packets were being dropped for them. There was an occasional noise of flying helicopters. The flood victims had rays of hope in their eyes to urge one thing to eat The next day the government arranged for the food and shelter of flood victims.

After three days, the flood began to subside. The people felt relieved. At the same time, they had the bigger challenge to re-start their lives. They started mending their homes, arranging their cattle, starting agriculture.

Every year government spends hundreds of crores of rupees to rehabilitate the flood victims. Many other citizens of India also donated a huge amount of money under the relief fund scheme.

The homeless were given temporary accommodation in schools, and other buildings.