Indra Nooyi:Indra Krishnamurthy Nooyi is the Chairman and Chief Executive Officer of PepsiCo, the world’s fourth-largest food and beverage company.

Indra Nooyi was born on October 8, 1955, in Chennai, Tamil Nadu in India. She received a Bachelor’s degree in Chemistry from Madras Christian College in 1974, and immediately entered the PGDBA (Post Graduate Diploma in Business Administration) program at the Indian Institute of Management, Calcutta.

After moving on from IIM-C in 1976, she worked in India for quite a long while (counting a stretch at Madura Coats). She was admitted to Yale School of Management in 1978 for a graduate degree in Management. 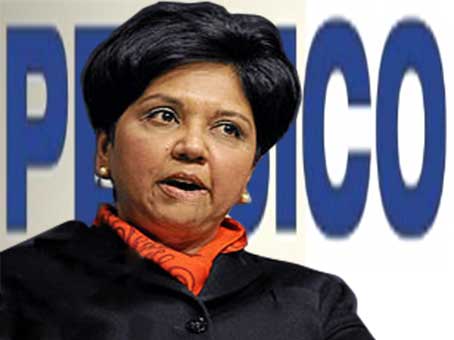 After getting her master’s degree from Yale in 1980, Nooyi started at The Boston Consulting Group (BCG), from where she moved on to strategic positions of Motorola and ABB.

Indra Nooyi joined PepsiCo in 1994, was named the president and Chief Finance Officer (CFO) in 2001. On August 14, 2006, she was named the CEO of PepsiCo, turning into the fifth CEO in PepsiCo’s 42-year history. Effective May 2, 2007, she took over the role of chairman.

While at PepsiCo, Indra Nooyi has assumed an essential job in beginning Tricon, which is as of now known as Yum!Brands Inc. Nooyi prescribed turning off Taco Bell, KFC and Pizza Hut, contending PepsiCo couldn’t carry enough an incentive to the cheap food industry. Nooyi likewise led the pack in the procurement of Tropicana in 1998, and merger with Quaker Oats Co.

She has been named the Number 1 Most Powerful Woman in Business in 2006 and 2007 by Fortune Magazine. She is listed among Time’s 100 Most Influential People in The World in 2007 and 2008. She is also a member of a highly secretive group known as Bilderberg Group. In 2007, she was awarded Padma Bhushan by Government of India. In 2008, she was chosen for the association of the American Academy of Arts and Sciences.

Indra Nooyi is a Successor Fellow at Yale Corporation and serves on the leading body of a few associations, including Motorola, the Federal Reserve Bank of New York, the International Rescue Committee, and the Lincoln Center for the Performing Arts.

She is also a member of the Board of Trustees of Eisenhower Fellowships and currently serves as Chairperson of the US-India Business Council. She was named 2009 CEO of the Year by Global Supply Chain Leaders Group.