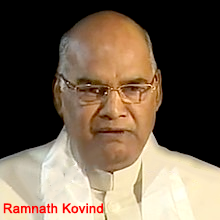 Ramnath Kovind: Ramnath Kovind (Born 1 October 1945) is an Indian politician who was elected the 14th President of India on July 20, 2017. On July 25, 2017, Supreme Court Chief Justice JS Khehar administered the oath of office of President of India.  He has been a Rajya Sabha member and Governor of Bihar State.

Life introduction: Ramnath Kovind was born in a small village in Kanpur district of Uttar Pradesh’s Kanpur district (present-day Kanpur Dehh District), a tehsil of Darrapur, Kanpur Dehat. Kovind is related to Kori (Koli) caste which comes in Scheduled Castes, Other Backward Classes in Gujarat and Scheduled Tribe in Orissa in Uttar Pradesh. After getting the degree of advocacy, he started advocacy in the Delhi High Court.

He was a lawyer of the Central Government in Delhi High Court from 1977 to 1979. On August 8, 2015, he was appointed as Governor of Bihar. He also passed the Union Public Service Commission examination in the third attempt.In 2016, while inaugurating a bridge at a function with Kovind Prime Minister Narendra Modi in Bihar, H.E the Governor of Bihar Shri Ram Nath Kovind welcomed Hon’ble President of India Shri Pranab Mukherjee at Patna on April 17,2017 On 17th April, 2017, Governor of Bihar Mr. Ram Nath Kovind welcomed the Honorable President of India Mr. Pranab Mukherjee in Patna.

President: The ruling National Democratic Alliance was declared the Presidential candidate of India on 19th June 2017. Amit Shah, National President of Bharatiya Janata Party, announced his candidacy by holding a press conference, Amit Shah said that Ramnath Kovind has come from Dalit society and he has done a lot of work for the upliftment of the Dalits, he is an advocate from the profession and They also have a good knowledge of the Constitution so they will prove to be a good president and will continue to work for the welfare of humanity. On 20 July 2017 The declaration of the result of the election of the President which Kovind defeated Congress candidate Kumar nearly 3 lakh 34 thousand votes difference. Kovind got 65.65 percent of the votes. After 13th President of India, Pranab Mukherjee, on 25 July 2017, Kovind sworn in as the 14th President of India.

Social service: He was also the President of the ‘BJP Dalit Front’ and the President of ‘All India Koli Samaj’. In the year 1986, he also served as the Chief Minister of the Legal Help Bureau of the Dalit class.