Population Growth In India: India is the second highest populous country in the world. The population of our country has already crossed billions. The population growth has been extremely rapid in the last 50 years.
The phenomenal growth is now more appropriately termed as “population explosion”.
There are various social-economic causes for the high growth of population. Main factors affecting population growth are the birth rate, fertility rate and control over death rate that have drastically changed due to new technologies in medical sciences.
The social issues that affect population growth are religious beliefs; poverty and ignorance which lead to high population growth. Illiteracy is the other main cause of population growth.
Illiterate people have a misconception that the use of birth control measures leads to diseases, defects or general weakness.
In some cases, it is also a major issue for males to use birth control measures as it is against their image and male ego. 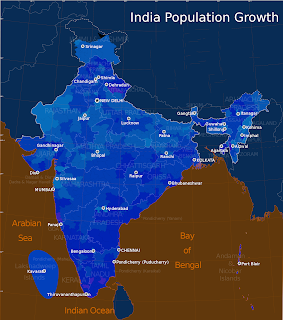 Another issue is the superstitious beliefs and myths that a male child is a must for salvation or recovery, social security, and continuation of the family tree.
People sometimes have many children in want of a male child. They keep giving birth until they finally give birth to male child. Cases of killing a girl child have also come up.
The custom of early marriage followed since many centuries have facilitated a wider range of reproductive period. The women keep delivering the child without using birth control measures in her reproductive period.
All the above social issues are directly related to illiteracy. These social issues are mainly practiced in villages or backward areas where people are still orthodox or illiterate.
The new modern generation of India is aware of the consequences and has started looking differently to such issues.

In cities and places where educated people are trying their best for having a good lifestyle which they know, is possible only through having one or two children.
The economic issues that affect population growth are like, in our country, people also have a belief in considering children as the source of income when they grow up.
In India, there is also total lack of economic security for widows and elderly people who make people go for more children as economic security. They forget the fact that they also have to support their livelihood and children are a liability to them.
Lack of proper medical facilities and high mortality rate of the infant to want more children also leads to high population growth.
The population growth adversely affects the growth of the country. The main reasons for this are  being the limited resources. With the rapid growth of population, the resources are depleting.
As these resources are limited and exhaustible, they have been declining so drastically that soon they would exhaust completely. Forests area unit being cleared to bring a lot of land underneath cultivation to supply food for increasing population and to form a lot of settlements for his or her living.
Coal, petroleum, gas, minerals, and forests square measure being too accustomed started additional industries to manufacture varied expendable articles to satisfy increasing desires.
More supply of water is required with more demand of the increasing population. However, the resources of water are limited. The rivers, wells, ponds, streams or oceans that supply water are also either drying up or facing water pollution.
In case of overpopulation, the lower class or the poor people do not have the economic strength or purchasing power to buy the required food grains. The extraordinary increase brings in grips the large pressure on alternative basic wants like education, health, housing, clothing, employment opportunities etc.
With employment opportunities within the rural areas changing into scarce, population explosion is leading to increasing migration of rural poor to the urban areas in search of jobs.
The increasing pressure on the urban areas is giving rise to ignore a number of slums and this is multiplying the problems.
On the individual level, it is our responsibility to understand the seriousness of the issue of population growth and its consequences. To keep a check and control over population growth, we have to improve the literacy rate, female education and the socio-economic status of the families as population growth is directly linked to these factors.
On a larger scale, the government has a major role to play. In the past, the government has tried to spread the awareness among people  With increasing accomplishment rate, the individuals are often educated to adopt a positive perspective towards smaller families.The Indian government had also launched the Family Planning Programme in 1951 to check ill-effects of population growth.