Qutub Minar is located in Mehrauli area of ​​South Delhi city in India, the world’s tallest tower built of brick. Its height is 72.5 meters (237.86 feet) and diameter is 14.3 meters, which goes up to 2.75 meters (9.02 feet) on the summit.
There are 379 staircases in this There are many excellent specimens of Indian art in the compound made around the minaret, many of which are in its construction period 1193 or earlier. This complex has been approved by UNESCO as World Heritage. 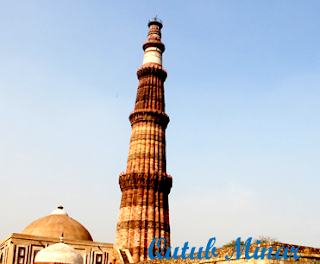 History: 72.5 meters (237.86 feet) wide Qutub Minar, the world’s highest brick built state (minaret).Inspired by the jam’s tower, and in the desire to move beyond it, Delhi’s first Muslim ruler, Qutbuddin Aibak, started the construction of the Qutub Minar in 1193, but only found its basis.
His successor, Iltutmish, increased the three floors in it and in 1368 Firoz Shah Tughlaq built the fifth and final floor. Changes in architecture and architectural style from Aibak to Tughlaq, can be seen here clearly.
The tower is made of red sandstone, on which the fine vertex of the verses of the Quran and the flowering of the vines has been done. Qutub Minar is built on ancient ruins of Lalkot, ancient fort of Delhi city, Dhillika. Dhillika was the capital of the last Hindu kings of Tomar and Chauhan.

It is said about the construction objective of this tower, that it is made in the form of Ajwain, inspection, and protection from the Quwait-ul-Islam mosque or symbolizing the victory of Islam on Delhi. There is also a dispute about its name.
Some archaeologists believe that its name came under the name of the first Turkish Sultan Qutbuddin Aibek, while some believe that its name is named after the famous saint Qutbuddin Bakhtiyar Kakki of Baghdad, who came to live in India.
Iltutmish respected them very much, hence the name given to Qutub Minar. According to its inscription, it was repaired by Feroz Shah Tughlaq (1351-88) and Sikandar Lodhi (148 9-1517). Major R. Smith revitalized it in 1829.