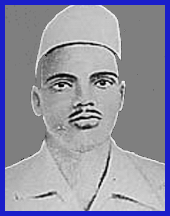 Shivram Hari Rajguru was born in the village of Pune district in 1908 according to Vikramaditya’s Parvati’s Trayodashi Samvat 1965 (Vikram). At the age of 6, after the father’s death, Varanasi had come to learn and to learn Sanskrit at a very young age.

He studied Hindu religious texts and Vedas, he had written the complex texts such as the small theorem in a very young age. He had a lot of exercises and was a great fan of Chhatrapati Shivaji’s guerrilla war-style.

While attending Varanasi, Rajguru was contacted by several revolutionaries. Chandrashekhar became so influenced by Azad that his party was immediately connected with the Hindustan Socialist Republican Army. Within the party of Azad they were known as Raghunath’s pseudonym; Not by the name of Rajguru. Pandit Chandrashekhar Azad, Sardar Bhagat Singh and Yatindranath Das etc.

were the integral friends of these revolutionaries. Rajguru was also a good shooter. In the execution of Saunders, he had given full support to Bhagat Singh and Sukhdev, while Chandrasekhar Azad provided the tactical protection to the three like the shadow.